I am going to file this article in both the experiment section and in the Case Studies area of this site since it pertains to both.

Our paranormal team investigated several locations in the historical logging town of Payson, Arizona. This small community is located about 75 miles northeast of Phoenix, AZ, in a dense region of thick pine trees propagated with small arteries of streams in and around the foot of the beautifully lush-green Mogollon Rim country.

Famous western author Zane Gray’s cabin is in this area and the territory was noted for its expansive logging in the early days of settlement.

We were asked to take a look at the old Payson County Jail. A tiny building with just two jail cells and we found out it was built in the early 1930’s, but due to the steady growth of Payson, a new jail facility had to be erected to house more inmates as needed.

The local Sheriff’s Posse group had taken over the building and turned it in to their headquarters; a perfect site for meetings and storage of files and procedural materials.

We were informed that several of the staff members complained that when they would open this building in the mornings, they would find files and papers strewn all over the floor as well as turned over chairs and other pieces of equipment. One person sometimes would hear voices and whispering coming from the cell area in the back of the building. Since the building was very small, just over 900 square feet or so, we inspected both cells and the office area. 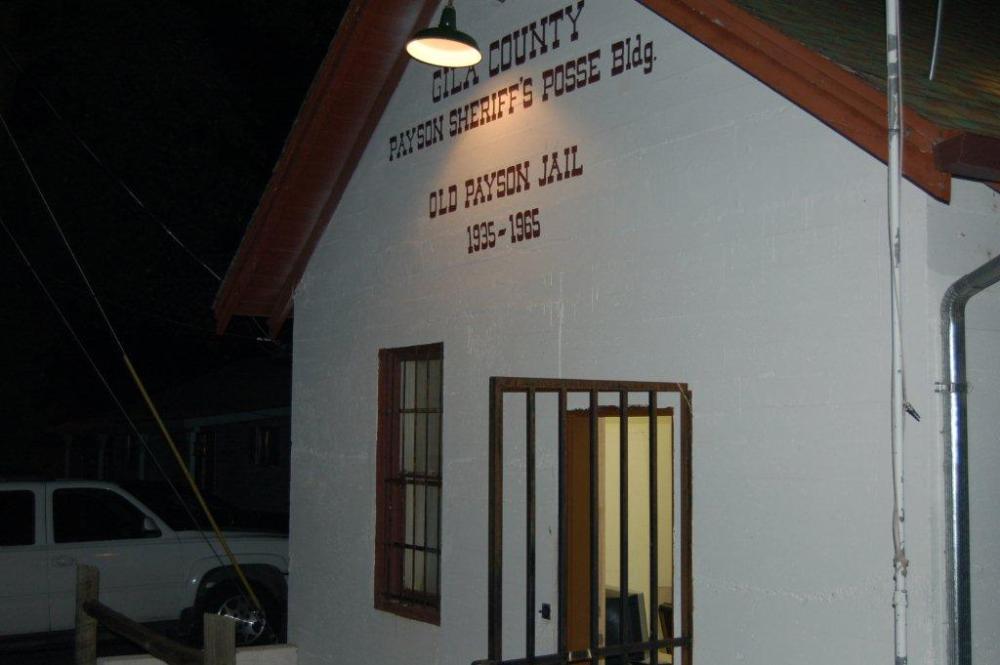 One of our investigators walked into the cell as we entered the facility on the right rear of the building and heard a whispery voice make a comment but there was no one there. We decided to take meter measurements checking the electro-magnetic fields in the structure. Nothing unusual was logged.

We decided to conduct an EVP session. I placed a couple of digital recorders in the main room where we were sitting. It then occurred to me to try and conduct a simple EVP experiment since a voice was heard earlier in the right rear jail cell.

Boundary microphones are often used in business meetings and are powered by a small battery. All you do is plug the microphone into your recorder and the sound is amplified into the recorder. These are inexpensive microphones and were the first I began to test in the field.

I had read an article earlier in the week that some researchers were finding that EVP was not physical sound at all and in some instances the EVP captured would sometimes be captured on another recorder nearby even though the investigators were in the room and heard nothing. Well, this sounded ridiculous to me. How could this be? Sound is produced by physical movement only. How could an EVP be captured in a recorder with an investigator nearby and the EVP could not be heard?

It was a shock to me that when checking the two recorders after the jail investigation with the microphones facing each other, one recorder had captured a whispery voice but the other recorder had not! Our psychic investigator who was with us in the jail during the EVP session had sensed a female entity in the room with us who she named Francis. I pursued the line questioning and asked “Francis” a direct question. This was the answer we received on one the recorders situated by the jail cell entrance. (Turn your computer speaker to full volume and you should hear the EVP at about 13 seconds on the clip below.)

Now, this is certainly not a great EVP. However we all seemed to agree it was an intelligent answer to the question asked. We believe the EVP is saying “Lots” referring to my question about how many children Francis had.

The important point about this evidence is that it was not captured on both recorders with the microphones situated more than maybe an inch apart facing one another.

If this was indeed a physical sound in the environment then both recorders would have captured it.

This confused me. The scientific community would argue that all I did was capture a piece of stray radio frequency or stray cell phone traffic recorded by chance on one of the recording devices by the jail cell.

I held on to this claim until years of investigation and testing otherwise contradicted this scientific band aid of a reason that could explain away Electronic Voice Phenomenon.

Are you ready to take the journey through the mystery of EVP origin with me?????