Stress in a home can attract and help facilitate reports of paranormal phenomena. But when a family is breaking up and strange activity is reported, this usually means that there is some type of phenomena reacting to the stress that the human agents are experiencing in their home.

Stress in a home that has a paranormal issue is like tossing gasoline on a fire. When children are involved in such claims, that case gets special priority.

What made this case so unique was not only were the children claiming to be seeing apparitions, but the parents were also claiming to see black masses moving down the hallway at night as well as hearing voices from unknown sources. What made them seek our group out was a photograph that was taken at Christmas. Father took a photo of his two small children and their mother in front of their decorated tree.

But when the photo was developed it showed a dark, shadowy humanoid shape that should not have been there in the background. We agreed to never show this photograph to the public but we checked the authenticity of the photograph and found out it was not tampered with and we deemed it a legitimate piece of evidence.

After interviewing the client, it was agreed to conduct a standard investigation with audio and video surveillance of the entire home.

When we arrived that evening, the Father informed us that he and his wife had decided to get a divorce and she had moved in with a neighbor down the street and took the kids with her. We found out that the mother did not want the kids to experience anymore paranormal phenomenon inside the home. They were just too scared to live there anymore. The divorce was pending and an amicable one. The home had just been put on the market and the father was living in the home alone.

When we interviewed him in the kitchen, the lights began to flicker on and off. The father told us that it happened all of the time. We inspected the immediate area and found that when you flushed the toilet in the bathroom next to the kitchen, the lights flickered. It was a power line bumping up against a pipe. The father was so relieved that we were able to debunk that claim.

When we were setting up equipment, I noticed that in the hallway going into the bedrooms there was a room that had no door. When I asked the Father about this he explained that that door was opening and closing so much on its own he simply removed it altogether. He had been using it as a work den where his computer was located. 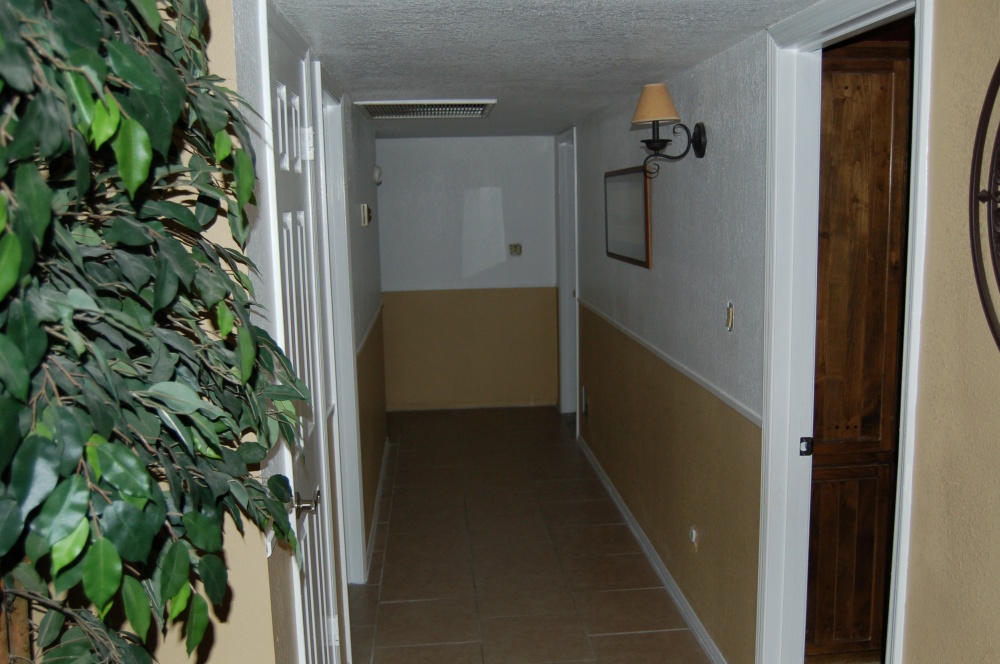 ( The den without a door where multiple EVP’s were captured.)

We conducted several EVP sessions throughout the house that night. There was a strange foreboding feeling in the place but nothing much happened. In the room with no door, I detected large amounts of electro-magnetic fields crisscrossing the room. The fluctuations were varied, but it seemed to indicate that poor wiring was to blame. There is a theory that high EMF fields can contribute energy into a haunted location that might assist phenomenon to manifest and move items to interact and scare the human agents. However, this has never been proven. The reason why we scan homes for EMF contamination is that some people can be sensitive to EMF fields and it can cause all sorts of problems such as hallucinations, sickness, and mood changes. It was standard practice for us to scan each home we investigated for EMF bleed.

At the conclusion of the investigation, we were packing up all of our equipment when I decided to enter the den with no door and conduct a quick EVP session since our audio was still running. In this clip you will hear me ask a direct question and get a very loud echo-type answer. The voices you hear in the distance were my team members packing up for the night in the kitchen.

This voice seemed to be from a child or a young person. But the echo is what was really startling. Some EVP’s will have this sound, which is so distorted that you just can’t really tell what it is saying.

I then slowed down the clip and noticed that there were multiple words in the EVP response.

Now, I will  speed up the clip to try and see it this voice is clearer. Click on the file below:

We believe that the EVP voice was saying something similar to  “ I like it here” or “We like it” or something to that effect. Most EVP is hard to analyze since the sounds are usually very distorted and muffled. But this voice was strong and obviously from a young person.

We asked the client for a second investigation based on this evidence. He agreed to it but told us the house was closing since it was just sold and he only had possession of it for one more week. We entered the home several days later. The power was shut down so we only had audio to investigate with.  This is when things got very strange.

While we were conducting a group EVP session our psychic investigator started to sense something in the room without the door. Our audio was rolling and we captured something very strange upon playback. In this clip you will hear the investigator talk about what she is sensing then you will hear a cackling laugh at 6 seconds into the clip in the background. We had multiple recorders in this room and this cackling was only captured on one recorder.

A few minutes later, we began to hear the cries of babies coming from the kitchen area just down the hall from us along with coughing noises. We inspected the kitchen but heard nothing when we arrived. This was not picked up on our audio in the kitchen either.

After the investigation we canvassed the neighborhood and talked to several people about the house in question. We talked to one person who lived just across the street who told us that an old man used to live at the house for many years, and there was a fire inside the home but they were not sure if anyone died or was injured. A historical review of the address turned up no useful information. We were at a standstill.

The house was sold to a company that rented it out. We found out later that several of the occupants had moved out of the home in just weeks, but we could not find out why this was happening.  We left cards at the door just in case the renters wanted to contact us but we never heard from anyone.

In most paranormal investigations you will never know the exact reason why a place has strange activity. If we would have had more time to conduct more investigations at the home, we might have been able to solve the riddle, or at least get closer to the answer….