The Birdcage Theatre was once an around the clock entertainment center for the hard working miners of the burgeoning boom town of Tombstone, Arizona, in the late 1800’s. Silver was being dug out of the ground in large amounts and it brought in gamblers, criminals, and prostitutes from all over the world who wanted to try and make a quick fortune in a place that would later be called “The Town too Tough to Die.”

Today, people from all over the world come to get a up-close look at the historical value of the place most famous for the Gunfight at the O.K. Corral where the Earp brothers, along with Doc Holliday, made a violent, gun-blazing stand against the Clanton’s and McLaury’s, the dominant criminal element in Tombstone and in the surrounding area. This gunfight that would live in infamy and later help define the pure essence of the wild, bloody west.

The Earp brothers, Doc Holliday, the Clanton Gang, Curly Bill Brocious, and the fast-gun, quick-tempered Johnny Ringo all spent time in the Birdcage Theatre. You can still view the original gambling table where a tubercular Doc Holliday used to polish his faro skills while awaiting his slow and painful demise from his diseased lungs.

At the corner of nearby Allen Street in Tombstone stands the old, rickety building full of western memorabilia, paintings, and oddities of that famous time period. When you walk into the main floor of the

Birdcage Theatre, the atmosphere of rich history lends a welcoming hand. If there was ever a building that could make you feel as though it was alive, this was it.
Twenty six murders occurred at the Birdcage Theatre. There are 144 slugs that still pepper the walls and ceiling. Evidence of drunken and lusty episodes that could be brought on by a wrong glare, a quick movement while playing cards, or by simply talking to the wrong working girl promised to someone else might bring an end to your life.
It is not surprising then that tales from the locals, patrons, and employees who visit and work at the Birdcage Theatre talk of ghostly voices whispering in the background, as well as reports of apparitions and loud footsteps walking on the old, rotting wooden floors are circulated frequently among the community and the paranormal teams who investigate it.
A local told us that sometimes at night you can see the dark, misty shadows come alive near the entry to the building. The employees of the Birdcage Theatre that we spoke to talked of hearing music from another era and a ghostly figure of a stage manager pacing back and forth on the tiny stage, and we can’t forget the reports of a lady dressed in period clothing floating around the basement area and down the staircase into the basement.

Since 2007, I have investigated this location four times. It is quite frankly one of the best places to capture audio evidence. However, you must apply environmental control features during your investigation due to the noisy outside businesses and thin walls that enclose this ancient structure. The Birdcage Theatre is first and foremost a tourist attraction and a big moneymaker in town. It is the only building in Tombstone not to have been burned to the ground during numerous devastating fires.

The Birdcage Theatre charges for paranormal investigations ever since it was highlighted on the show “Ghost Hunters” many years ago. Groups from all over the world wanted to investigate it and extra staff had to be hired just to accommodate investigations. You will hear some of the evidence I have collected in those investigations and can judge for yourselves if you want to try your luck in this very strange and creepy location.

Without a doubt, the Birdcage Theatre is the best place that I have ever investigated in capturing paranormal audio evidence during controlled EVP sessions.

On my first investigation there it was the most active. It was freezing cold and just after Christmas in 2007 when all five of us decided to try out our luck. The cold kept most people out of the streets that night so there was very little noise pollution to contend with. During the investigation I monitored a one hour long controlled EVP session in the main room with headphones and a “shotgun” microphone. This microphone is more powerful than a parabolic microphone. I heard nothing live the entire audio session.

Later, upon evidence review I listened to the 17 digital recorders I had placed throughout the building and was shocked at what I was able to capture.

This video below was produced by author Jeff Belanger, a short six minute documentary on the Birdcage Theatre. I gave him permission to use my audio evidence that I obtained during my first investigation at the theatre. This piece of evidence was captured in the basement while all five of us were sitting quietly upstairs. (Fast forward to the 3:25 mark if you don’t want to watch the entire video to hear the EVP.)

Now, listen to the unfiltered EVP clip here, but pay attention to the multiple voices you hear just before the “None!” reply to my question. We believe these voices are saying “No, they don’t live here” but it’s not very clear.

Why is this important? We have multiple paranormal voices commenting on my question about “Soiled Doves.” This was a term used in the early west to describe prostitutes, or working girls. In the Birdcage basement a bordello with tiny rooms was located near the poker tables in the late 1800’s. Did this historical question trigger a paranormal response?

In the upstairs foyer, just up from the main floor, a dark colored hearse called the Black Mariah which carried the dead from Tombstone to Boot Hill is rumored to attract all kinds of photographic phenomenon. 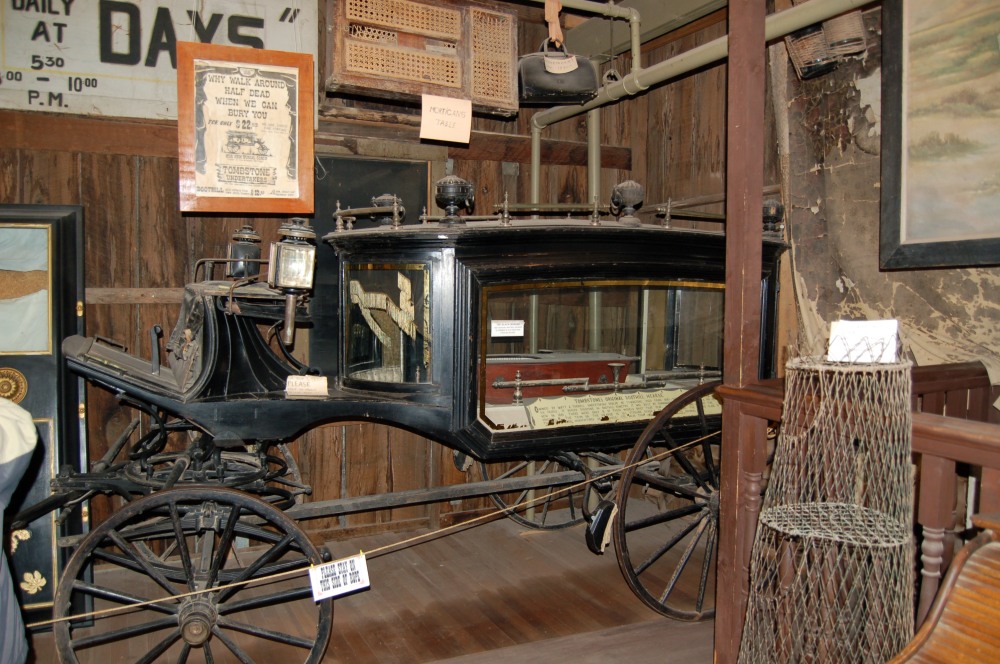 However, I captured this next EVP commenting on my question about the town’s newspaper close to the Black Mariah hearse. The voice is very fast, but very clear response of “That would be you.” Click on the file below.

This next audio file sounds like it was from an old, tired man. The voice is so unclear but we think he was trying to give us an intelligent answer to the question about how many spirit people lived inside. Can you guess what this EVP is saying? We can’t! It was captured on only one of the many recorders placed among the casino as you walk into the museum. This was a confirmed EVP.

This next clip was interesting because I had heard reports of shuffling of playing cards that was being captured by other paranormal groups. On this audio file you will hear the investigator ask a question of where boots were purchased. On a recorder in the basement overlooking the poker tables you will hear what appears to be poker cards shuffling in the background. No one was in the basement and the other recorders nearby in the basement did not capture this sound. I believe it is authentic.

On our last investigation in 2015. We were testing the SLS camera (Structured Light Sensor) in the Birdcage Theatre store located in the basement by the poker tables. The SLS camera is an exotic new piece of equipment that supposedly detects paranormal phenomenon then maps a stick figure to tell you it’s in the room. There is not a lot known about this invention, and we are just taking it to known haunted locations to test it. However, on this night we had two female investigators conducting an EVP session inside the store alone in the basement. It suddenly detected this figure in front of them. Here is the short video clip of that incident below:

After this video clip ended, almost two minutes later, as the female investigators were still talking about the SLS figure detected, we captured an EVP from an omni- directional digital recorder set-up in the exact area where the figure was standing in the store on the SLS video. After you hear the investigator say a long and drawn out “Right” at 5 seconds on the clip below, you will hear a male voice comment on the camera.

Was this EVP evidence of the validity of the SLS figure captured on video? Perhaps. But it also could be a coincidence as well. The Birdcage Theatre is a hotbed for EVP activity that can happen anywhere in the building. More testing of the SLS and EVP is needed inside the Birdcage Theatre for more of a concrete study.

Tips on how to investigate the Birdcage Theatre:

Place a digital recorder in the entry pointed at the street. This will pick up sounds of footsteps on a creaky wooden sidewalk outside that sound as though they are walking right in the main floor with you inside of the museum.

Use multiple recorders throughout the building. There is a wire mesh window without a glass barrier that leads from the main casino room into the basement. If you talk loudly enough during your controlled audio sessions, your voice will easily reach those recording devices in the basement since the building is so small.

Sit very still during your investigation. The building is loaded with old, creaky wood. If you walk around during your controlled audio sessions, one of those loose planks of squeaky wood may sound like a moan or groan. Control your environment.

( Below is author and team member/investigator Sharon Day getting the thermal camera treatment at one of our investigations at the Birdcage Theatre.) 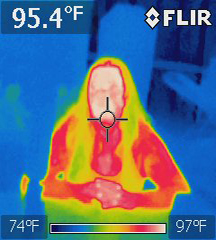 While you can pick up paranormal evidence almost anywhere inside the Birdcage Theatre, here are some areas of interest where phenomena seems to continually produce evidence.

It’s the last area before you exit the building. Many apparitions and voices are documented in this area. This is the best shielded area for noise contamination in the entire building. It is very close to the bottom stairway where dramatic temperature cold spots are recorded. It was in this location that we recorded a 10 degree temperature change of a cold spot that landed on my neck and shoulders with a laser temperature gun in just seconds. It was a bone chilling cold that I will never forget and have not experienced since.

There is a great deal of EMF and object movement reported near this carriage in the upper loft of the building. EVP’s are gathered quite frequently in this location.

Easily, the most active place to record EVP in the building. When you get off of the staircase in the basement, turn left and follow the guard rail all the way down until you come to the wall facing the high stakes poker area. You will see the small cellar on the right side. Position your audio equipment on the guard rail facing the poker tables by the wall. There is something very unusual lurking in this area and it keeps producing great EVP evidence.